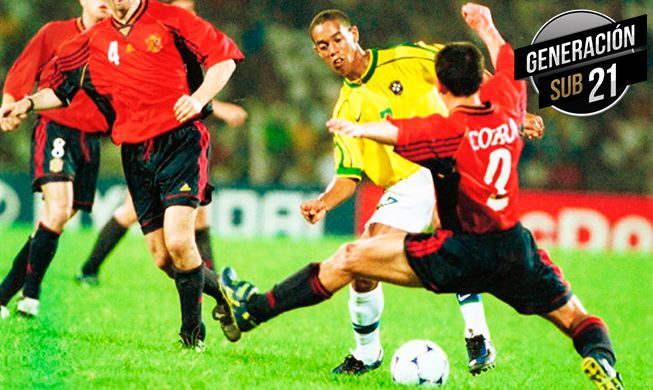 Nine years have gone by today when the applause of the Santiago Bernabéu stadium greeted footballer Ronaldo de Assis Moreira “Ronaldinho” despite at the time wearing a F.C. Barcelona jersey, he was recognised for his extraordinary game style.

The stellar player from Porto Alegro haS never played against Spain in the Senior squad but did so with the U-20s on 5th April 1999 in the first Nigeria World Cup and against footballers who played for the U-21s at the time, like Aranzubia, Coira, Marchena, Orbaiz and Pablo Couñago, among others.

Featuring as part of the starting line up was Xavi Hernández i Creus who had been playing in the category for the past months, and made his debut only six days before the Nigeria World Cup directed by Iñaki Saez.

Aranzubia, Coira, Marchena, Orbaiz, Pablo Couñago Varela, Barkero, Colsa and Fran Yeste made up the group of footballers who made their debut in the Under-21s

At the U.J. Eusuene Stadium in Calabar, the Brazilian side, favourite for the win of the tournament, was made up by Fábio, Matuzalem, Edú, Milton, Baiano and the well-known Ronaldinho, who succumbed to Gabriel Francisco García, Gabri.

It was the first step to conquer the World Cup in the history of the Spanish squad thanks to an unforgettable generation of athletes, who were made up by Fernando Varela, José Javier Barkero, Gonzalo Colsa and Fran Yeste.

A fun anecdote of that night was that the substitute keeper would continue in the U-21s until the Summer, who five years later would face Ronaldinho again at the Bernabéu would praise. In this case it is goalkeeper, Iker Casillas who still plays for the National Team.